As part of the planning of industries to service and therefore buildings, I found that I had space for a flat industry in Whitehall. I could also then re arrange a few things and move the propane dealer to Port Henry on the short track and use the longer track in Whitehall for a printing works that could use paper from the mill and provide another destination of on line and off line cars. So Star Printing was born. (after a real printing works on the D&H in years gone by). This then enabled me to use a few buildings is received from Barry and John.

I also have had a old plaster very long, low relief warehouse that I wanted to use. I found a space in Whitehall and I was going to model a dis used track and warehouse. But I could not let the opportunity for another industry to slip by. So this necessitated another track that I could connect to the main. The only issue was, I was all out of right and turnouts. Given 80% of the turnouts on the layout are hand built, then making another was not a big issue. I also have long been planning on replacing a turnout on the main entering Port Henry as I was not happy with the reliability of it. So 2 more turnouts were planned to be built.

I prepared the relevant tools for the task at hand, turned on the soldering station and... Pooof.. with a large bang or pop and a large amount of smoke escaped from the soldering station.. Well that did not go to plan. It was 5:05pm on a Monday evening, so I jumped on the phone to my local Jaycar supplier here in Sunbury to procure a new station. Fortunately, they had one in stock that was the same as my old one. I have a very fine point on the iron so wanted to retain that.. A quick run down the street and back and by 5:25 I was good to go..

Thus turnouts number 105 and 106 were created. I then weathered the turnout in readiness for the install.

Here are the turnouts, ready to go. 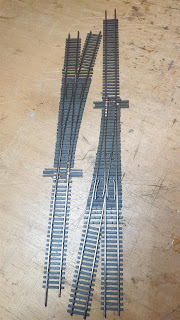 Here is an updated plan of the layout with the extra siding at the top in Whitehall.
The top level is unchanged.

Now to install the turnouts and change a few tracks in Port Henry to enable them to align with the planned buildings.