A bit H beam goes a long way
As the upper level of the layout is at eye height, the space between the body and the trucks on the LifeLike Alco C424 is larger than most other locos, I decided it was time to do something about it.
After some experimentation with various size Evergreen H beam, I found just the right size with some basic modifications.
Looking at pictures of the actual loco, the main sill is fairly high compared to the trucks. So the model is fairly accurate, the only think missing is the sub frame.
Here is a picture of what I was aiming for. 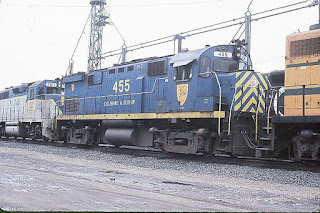 Here is a modified loco with a sub frame to fill the gap. There is enough space for the trucks to rotate a pivot forward and back. Once installed, I simply painted them black and added a bit of mud brown to simulate a bit of weathering. I completed this modification on 3 of the 4 that I have and will now complete testing before I do the last one.

This is the great thing about this hobby. If I get  bored doing scenery, I can move to JMRI, building brass signals, to electronics to setting up car cards and schedules.. So different things we can do.
Posted by Brendan at 09:33 2 comments:

Correct weight??
In order to achieve a good running layout, I think it is wise to bring all the rolling stock up to a standard in weight. I chose to fairly closely follow the NMRA weight standard for rolling stock.
I have spent the last few days weighing each car on the layout. At this point probably 300 cars in total.
I found most of the newer Microtrains 50ft cars and some 40ft cars are on spec, but all the Atlas cars are under as is older rolling stock from Minitrix etc.
I have had a tub of lead shot (from 12 gauge shot gun cartridges) in my drawer for many years and decided to find the best way to add weight. In the majority of cases 2 x Zinc plated 5/16th hexagon nuts super glued to the floor of cover hoppers, coal cars and box cars did the trick. In some cases 2 x 3/8th nuts for the lighter cars. For the gons I either added a load that has some weight about it, or added the lead shot to the underside of the car and super glued it in place. For tank cars, I simply loaded them with lead shot up to the right weight and reassembled them. For the Atlas 90t coal hoppers with coal load, the load has 2 internal posts so I just placed the nut over the post to stop it float around in the car and placed the load back in place.
Here are a few pictures showing progress. 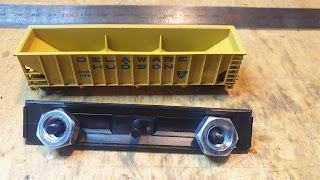 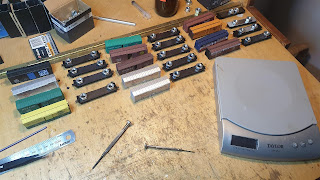 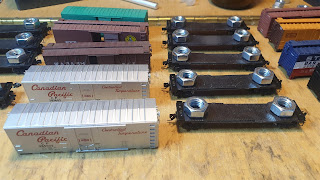 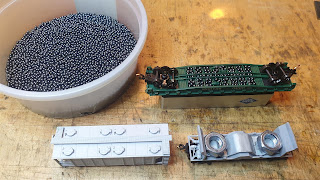 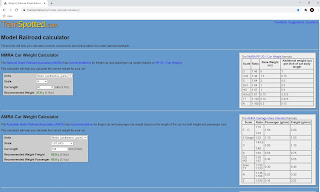 As I have 2% grades on the layout and most newer loco's don't pull well, I have adopted the idea of a car to motive power ratio. I had read about this somewhere on the web.
The idea is that to add the right number of loco's to the train you count 2 cars per traction motor of the loco. As most D&H loco's are 4 axle then this is basically 8 cars per loco and my trains are up to 20 cars long and longer in some cases. For a 6 axle loco, like a C-628, or a U30C or a SD45, the ratio is 12 cars per axle.
This works out well as a lot of the early to mid 70's 4 axle diesels are only 2000hp to 2400hp and some only 1800hp. As I have a number of loco's and like big lash up's most trains have 3 loco's on the point.
If a train is made up of 40ft cars then it will be lighter than a train of 50ft cars or 90t hoppers.. So the appropriate motive power needs to be on the train. If the chosen loco's cant get the train up the grade I will just add another loco or do what the D&H did and use a set of helpers on the back end of the train.
Now for some testing to make sure I have not gone overboard. Most weights (nuts) are removable.
Posted by Brendan at 17:51 1 comment:

Debugging Completed
Over the last few days I received some updates from the great team on the Groups.io / JMRI forum.
The issue was quickly identified in that I changed both the Appearance xml file and the aspects file to get what I wanted. The issue was, JMRI uses the user defined Appearance file but ignores the user created aspects file and uses its own. As soon as I replaced the JMRI provided one, things worked perfectly.
Here is a capture of the panel with NX routes with all signals working as expected. This picture shows a number of trains on the layout and 2 routes set for trains operating in both directions. 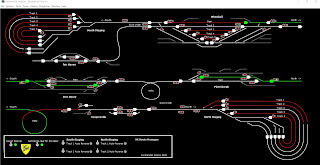 Now that the panel file is set up with NX routes, in order for signals to function a dispatcher is needed to set routes for each of the trains. While this is great when I have an operating session, it is not great when I want to run as a lone ranger. This issue is easily fixed by removing the NX routes from the routes table and going to each of the White arrows on the panel and hiding them. This effecitvely changes the panel from a APB panel to a ABS panel where all the signals will operate automatically in both directions. While not strictly prototypical as the 1st into the block will get the green and opposing trains will get a red but it at least enables signals to operate as trains pass through the sections dependant on the route set by the engineer at each of the local panels on the layout.
Here is a screen grab of the modified panel. 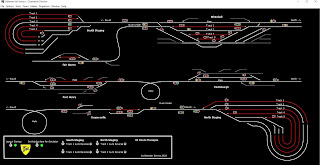 My plan going forward is to maintain the panel WITH the NX routes configured as the "gold"file and then once changes are made in that and tested, then I can go and copy and rename the file to a NON NX route or ABS file and go and hide each of the NX Icons.
The best of both worlds in a simple change in the Panel file I load.
Now for more testing out on the railroad to make sure I have covered all possibilities.
Posted by Brendan at 20:56 3 comments:

Debugging.
Over the last week or so I have spent a number of hours adjusting and debugging the signalling system on the JMRI panel. I have basically developed my own set of aspects based on the AAR-1946 rules and removed a number of aspects that are just not needed for my layout.
There are a few quirks to fix such as the Approach (Yellow over red) and Medium Approach (Red over Yellow) that are not showing correctly. I have enlisted the help of the guys on the JMRI Groups.io forum. So hopefully will have a fix soon.
Here are a few screen gabs of the panel showing Routes set and trains progressing around the layout in opposite directions. There are a few signals showing the wrong aspect and thats all part of the bud fixes I'm working on.
Red - Occupied, Green is a route set, and White is no route set / no trains in the blocks.
The large green arrows are used to set the start and end points of a route and once the route is set the direction of travel.
Note the large sections of green in both staging yards on all the turnouts are 1 block per yard holding all turnouts. While the entry to the staging is not that large in terms of the turnouts section or block, showing them in a cohesive way on JMRI is a bit of a challenge. Hence it looks a bit odd but it works.
This screen capture shows a Train in the middle 1 turn helix heading south and a route set into track 1 in south staging.
It also shows a train exiting the loop in Plattsburgh and heading to the 3 turn helix (bottom left) and a route set to track 1 in North staging. 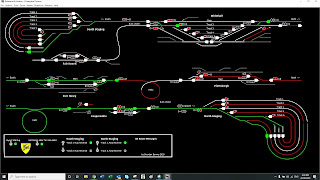 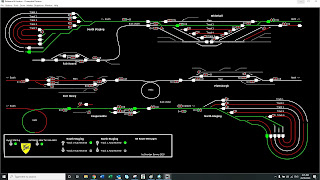 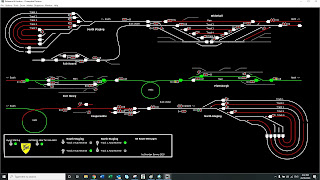 This screen capture shows a Train on the main in Plattsburgh waiting for a route.
It also shows a train entering Plattsburgh from the North on the loop for the meet and a route set to enter the loop in Port Henry with no route set beyond Port Henry 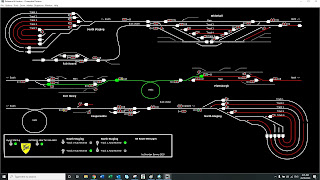 More to follow once I get the aspects sorted out.
Posted by Brendan at 19:37 No comments:

Signals on the JMRI Panel

This weekend I got stuck into defining all the signal heads and then signal masts for the panel and linked them to the outputs on the various driver boards under the layout. With a careful bit of planning, this went with out a hitch.

Then I added the signals to the panels and defined the logical order or connections between the signals.

Then some virtual testing was completed.

The signals work as expected apart from a mine issue where the highest aspect is approach medium. I cant get them to go full clear. I suspect this is something to do with speeds set on the blocks or turnouts. I spent a fair bit of time looking for the issue but it has eluded me thus far. I will place a post on the JMRI Groups.io page to seek assistance from the guru's.

Here is the panel as it stands today.

If you look closely, the signals on the main through Whitehall, Port Henry and Coopersville all show a yellow over green (Approach medium). In my mind, they should show Green over red. (Clear).

The below shows 2 routes with trains leaving both ends of the layout and set up for a meet at Plattsburgh.

Will continue to fault find the issue and keep the page updated. 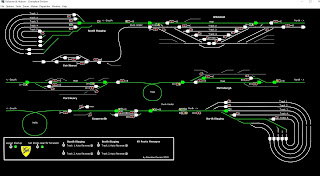 Then I can start testing my existing signal masts and then start installing them on the layout.
Posted by Brendan at 17:24 No comments:

A little while ago I updated the arrows on the panel to make them easier to select with a mouse when setting routes. Here is a screen capture of the revised panel.

I'm still yet to add the signals to the panel. 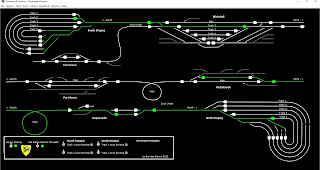 More recently I have been busy adding SMD resistors to new metal wheels and then installing them into my rolling stock. I did have about 1/2 the cars with resistors now all the rolling stock on the layout has them. Should make detection even more reliable than it was.. (And it was reliable before).