Time to get serious with an Ops session.

Per my last blog, we had another shake down of the layout last weekend.
The main change this time was to introduce car cards for each car on the layout. As most of the operators are familiar with the way they work there were no issues as long as the guys randomly drop off x number of cars and leave the relevant car card at the town where they left the car and also pick up the relevant car cards for the cars they added to the train.

Now the next step is to add way bills to each car to enable them to actually have a purpose for being on the railroad. This is a fairly large task as there are around 450 cars on the layout at present.

With the help of the guys that have been their before, namely, John Fahey, Rod Warren, Ron McFarlane, and Greg Johnstone, I have been researching and listening from the masters as to how to do this that meets the needs of the railroad, meets my needs and also best replicates the way we are all use to doing it on each others layouts.

The following web site has given me a number of ideas.
http://home.comcast.net/~prrndiv/ccandwb.html
This site has been very useful in terms of looking to determine the saturation of the layout in terms of cars on the layout. I think I will start with around 70% saturation and go from there.

Given Im going with 70% saturation and the layout is all but at 100 % now, I will need to remove about 90 cars from the layout before I start the next part.

See the following portions of my excel spread sheet that I have used to work out industry capacity, types of cars etc. 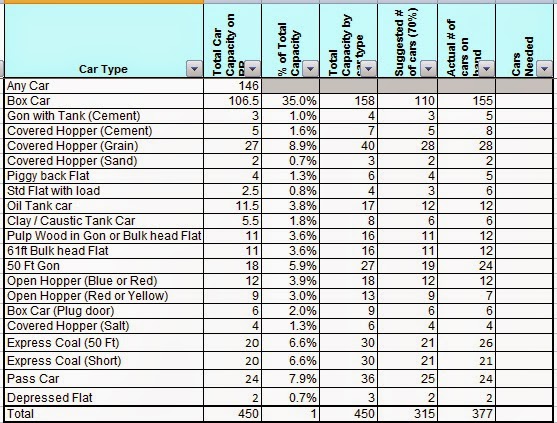 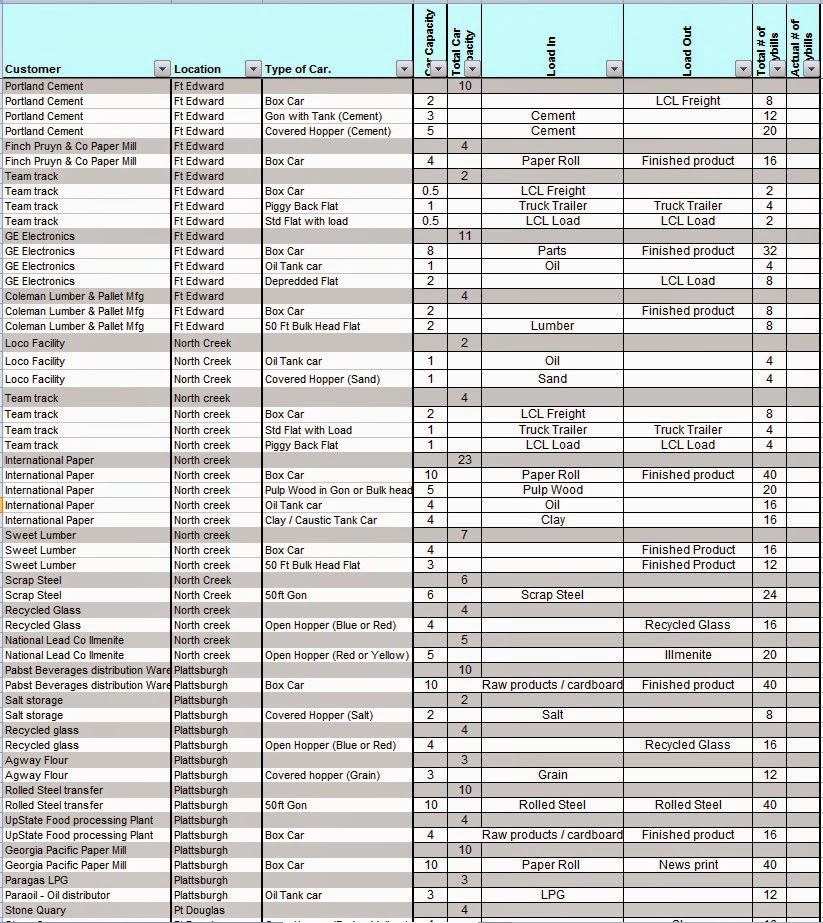 I intend to use mostly 4 way waybills for my cars, however there are a few block trains that wont switch any cars so they will simply be 2 way waybills to ensure that they get from North to South staging etc. Not to say that a car within these trains cant be given a bad order on one of the cars and made to drop the car at a town to enable it to be repaired.

The basic waybill will look like this and is double sided. 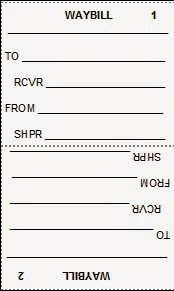 I plan to take the advice of the guys and just sit down with a pencil and a stack of waybills and slowly work through each car and determine where it has to go to and from and track them so I don't over load the system.

In the mean time, the guys found a few cars from the last session where I had mis typed the car number so those need to be fixed before I make way bills for them.