CTC Panel and Signalling system
At the outset, one of my main givens was a fully automated signalling system. I wanted to represent, as accurately as possible, the CTC block signalling system used by the D&H in the late '60's to late '70's. I was lucky enough to find a original D&H rule book for the 1940's that contains all signalling aspects that the D&H used that I could replicate on my own railway.
One of my requirements was that the signalling system did not control the trains, it simply displayed each signal aspect of a given block that they are protecting like the railway wood.
As the D&H signals all have 3 search lights per track that they are protecting the number of possibilities for different aspects was large. In developing the CTC panel I simplified these somewhat and reduced the number of combinations down.. This was primarily due to the number of blocks I have between towns was much less than the real railroad. The D&H also uses the signal aspects to display speed requirements as well as occupancy.
In order to be able to have the CTC panel I needed input from the layout in terms of block occupancy and also outputs in the form of signals.
As I had decided on Digitrax as my DCC system, I then started to look at the various products that are on the market that provide both block occupancy as well as signal drivers and the signal masts themselves.

Block Occupancy:
There are a number of block occupancy products on the market that range from the BDL168 that uses a bridge rectifier arrangement to detect trains to current sensing through coil arrangements.
In my earlier layout that I used to test some of these products I dabbled in a system that uses coils to detect current draw on the power for the track. This worked well but then needed to be connected to other boards that then provided the info on the Digitrax Loconet. In my testing I used the DS54 to bridge this gap and it worked ok.. But not as good and reliably as the BDL168.
All work very well, but the BDL168 came to the top of my list due to the cost per block was more effective than others. The BDL168 also has another feature that I utilise to drive other outputs that is not widely known (more on that later..) so the BDL168 was the occupancy detector of choice.

Signal heads:
As I model the D&H, signal masts and heads that represent what the D&H use are not easy to come by, in fact they are next to impossible. So the only option I have is to scratch build them. Luckily I have a very good friend that is a master in design and brass etching. I was able to adapt his target signal head and ladders that are used for his west coast layouts into what I needed for the single mast 3 head signal units that I needed for the D&H. The D&H also use their own design in terms of tripple head dual mast designs (2 major variances) that I would also need to make. Over the last few years Vic and I have been working on a design that matches that of the D&H and am in the final stages of assembling the test etchings that I hope will work for my layout.. 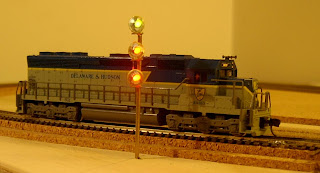 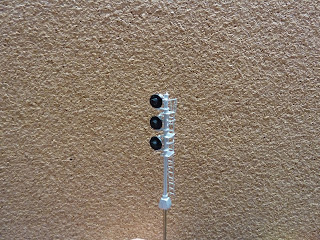 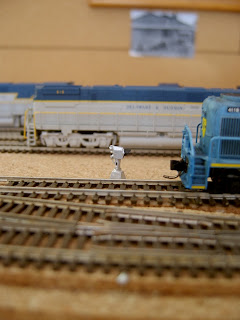 Signal Head Drivers:
TC-64..
As I wanted to represent the signalling rules of the D&H, off the shelf signal driver boards such as the Digitrax SE8C does not do what I needed to do. I then decided that if I wanted to represent D&H proto typical aspects I would need to fully develop those rules in a bunch of programming tasks within JMRI Panel Pro. Once I got my head around how JMRI works the rest took a bunch of trial and error and testing. Over time I managed to get JMRI Panel Pro to do what I wanted.
The other critical factor in driving signals is the hardware that interprets the info on the Loconet that panel pro is sending into a large number of outputs to drive the signal aspects.
I did a heap of research in this area as well and found that common cathode LED's was the most efficent way to driving low current draw outputs as all the hardware needed to do was current sinking and not current sourcing. This was a critical decision in the cost effectiveness of driving my signals. I found that a product called a TC64 from RR-Cirkits matched what I needed and it also can current sink its 5 v outputs with out any additional hardware or circuitry. I was then able to find a 2mm LED with a square back that matched my requirements being common cathode, 3 colour (Red, Green, Yellow) and 3 pin devices on the internet from a LED supplier. This would work perfectly for what I would need. 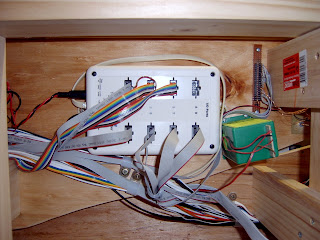 On the output of the TC64 I have also made a small board that is near the signal that holds the drop down resistors on it. This enables me to drive the Red and the Green at different voltages to obtain the colour I want. 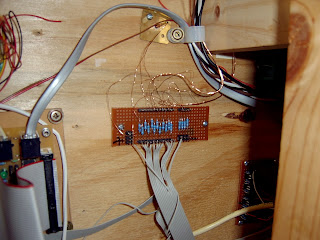 BDL168:
Who would have thought that a BDL168 could be used for both block detection AND a signal driver. The BDL168 is primarily designed for block detection, it also has a LED output that can be used to check or monitor the occupancy of each block.. Upon further investigation of the BDL168 manual I found that the LED outputs can be decoupled from the Block detection part of the board and be used as individual outputs that can be controled directly from the loconet and therefore use Switch numbers to control them. I decided to give it a test with the tester board that comes with the BDL168. This worked a treat.. Given the output is really only designed to drive LED's at 1.5v and I wanted to be able to drive my signal LED's at differnt voltage / currents to get the right colour Yellow (from combining the Red and Green) I developed an additional circuit board that has 4 sets of 4 Optocoupler chips on it.

What is a opto coupler I hear you say..? It simply has a LED inside the device and a transistor that is turned on when the LED is turned on. As the LED and transistor are not electrically connected (See here http://en.wikipedia.org/wiki/Opto-isolator ) then the transistor can be run at any voltage while protecting the BDL168

This board has connector wires that come direct from the LED outputs of the BDL168 and then via the opto coupler a transisitor is used to drive the individual colour on the LED. I also use 330ohm at 5v for the green LED and 660ohm at 5v for the red LED. I found that if I use these resistance values I get a nice yellow when both LED colours are run at the same time.

Here is an example of the board I made. 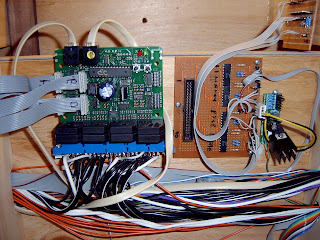 The 40 pin cable that runs between the BDL168 and the board is disconnected to to make it easy to see the board. 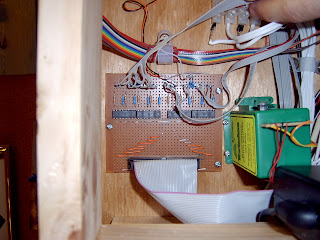 ﻿
After I had constructed the majority of the layout using older BDL162's (that I thought were BDL168's) I found that when more than 1 loco is run within the control of 1 BDL162 set of 16 outputs it can cause the BDL162 to give false readings on the other ports on the BDL162 when the supersonic motor control is enabled. This is a well known fault of the older BDL162 and while Digitrax did offer a upgrade program to the BDL168 at the time, by the time I had found the problem it was too late for the upgrade program. As I was committed to the Digitrax block detector I replaced the 4 x BDL162's with BDL168's. I was then faced with the dilema of what to do with the BDL162's that I could no longer use for block detection. However, because of my earlier investiations I knew that I could use them to drive my signals. So I kept theseemingly redundant BDL162's and made boards for them and also monitored the internnet for other people wanting to sell of get rid of their older BDL162's.. I now have a stock of them and will continue to use them to drive my signals.

Signals and output drivers needed. (oh the numbers.)
As all my D&H style signals have at least 3 LED's on them and up to 6, I knew that I was going to need a bunch of driver boards for my signals. When calculating out the number of outputs needed for the layout per my signal design, I found that as each LED would need 2 outputs (1 for the green and 1 for the red) from driver boards that would mean that each signal mast would need a total of 6 outputs for each set of 3. So for the places I needed the dual mast signal installments that the D&H used I would need a total of 12 outputs for each mast. If we then further calculate this out that would me that each interlocking that is a simple turn out into a loop this would mean that I would need 18 outputs. While not a big issue in terms of programming, the cost was a factor.. At this point I reviewed my signal aspect design and found that in 98% of cases the bottom signal aspect did not need to change from red if I elimiated some of the signaling rules that I did not really need. I then updated my plan and this would reduce the number of outputs needed to drive a single mast from 6 to 4 and from 12 to 8 for a double mast installment. This then mean that for each interlocking I would need only 12 outputs. While this does not seem a large difference, when you multiply them out and as I have at least 28 signal masts this would end up being at least 336 outputs needed to just drive the signals let alone the LED's on display panels etc. I think the decission to hard wire the bottom LED to be RED all the time was a wise move..

CTC Panel Version 1.
My first version of my JMRI CTC panel worked out well, although upon testing and a running session with my local crew of friends we found that seeing the track occupancy was a bit of a challenge..
So in order to fix this I changed from Panel Pro Panel editor to the Panel Pro layout editor..
This then enabled me to change the colour of the block of track that the train was occupying and thus enabled reading it to be much easier..
While this does not follow strict CTC panel protocol I thought it was a wise compromise.

Here is the first Panel. 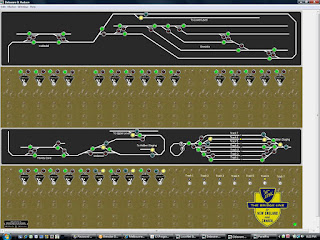 Here is the current panel. This panel not only shows block occupancy but also shows the current aspect of each signal to make it easier for the CTC operator to see what is happening. 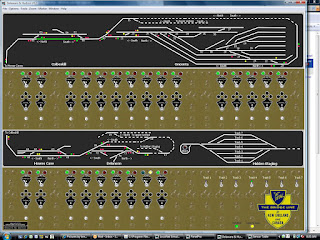 As you can see there are drawings for the signal leavers below the turnout leavers on the top and bottom sections. I have yet to program those so they are blank at present. So strictly speaking the panel and layout run the signals in ABS mode rather than true CTC. I plan on programing it in the future to be both..
Next time...
The prototype.. Why the D&H.