Time for some track laying:
After much consultation with my local buddies and mentors I decided upon 3mm cork road bed directly on 12mm 5ply..
I then marked out the staging yard plan on the sub road bed and laid the cork.
Then it was down to the track work...
As the staging yard has a complex set up with 4 or 5 turnouts in a row I printed the section from the Atlas track planned and set up the turn outs on my work bench and soldered them together. Then I laid them out of the board and drilled the holes for the switch motors to be mounted under the layout.
I have always enjoyed laying track and this was no exception..
In order to keep the track on the cork, I used clear silicon as the glue to hold it in place.
On order to achive a thin consistancy I ruled a line as to where the track was to go, then run a narrow bead along the line and then used scrap cork to smooth the bead out to a very thin layer of silicon sealant.
As the silicon goes off in about 5 min I had a short period of time to get it right..
I used a long ruler to ensure that the track remained straight and used push pins to hold the track in place while the silicon dried.
The picture below shows the end of the staging with its return loop.. The return loop is to be automated but I will leave that info for another blog in the future.. 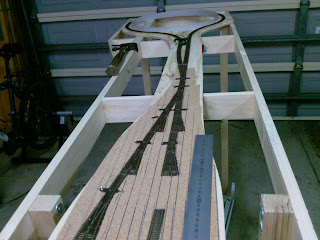 Legs.... for construction..
As my future aim is to display the layout at local exhibitions I constructed the modules in such a way as to ensure that they all have legs.. All the legs are timber legs and are set up in the traditional way of 2 coach bolts and recessed nuts to hold them in place.. While this may be a time consuming exercise when setting up and pulling down at exhibitions, I figured that the number of exhibitions would probably be low so the low cost was the way to go.
The benifit of the legs also ment that I could use them during the construction phase of the layout in the garage.. As the layout does not need them when it is on its brackets when set up in the house the legs can then just be stored for future use.. You can see the legs in the picture above..

Test Run for the Staging loop.
Once I had completed the staging tracks, I then decided it was time for a test run.. I unbolted the 3 modules and took them inside..
The test went reletively well until I ran to Kato U30c's back to back around the end loop.. I then discovered that I had commited one of the cardinal sins of track laying and created a left, right combindation turns way too close to each other with out adding a straight section.. This then caused the longer loco's with body mounted couplers to bind and derail.. I soon found the issue and corrected it before it was too late (aka install of the layer of track above the staging yard..

As you may be able to see from the picture above, the return loop is fairly tight. As I needed it to be 9 1/2' radius I used Atlas code 55 9-1/2' curves to ensure no nasty joins.. As this section is hidden and going to be difficult to do any track maintenance I felt this was critical... On the rest of the layout I have only used Atlas code 55 set track for the joins between modules, turnouts (#7 and #6) and these tight curves. The rest I used normal Atlas code 55 flex. 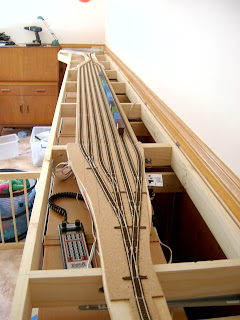 Turn out control:
As I also enjoying in dabbling in electronics, and the fact that one of my givens was NO turn out switches on the front fascia. As I am not a fan of layout top manual ground throws and the Atlas code 55 turnouts need something to lock them in place I decided upon managing the turn outs via DCC and switch commands from the throttle or CTC panel.
I did a heap of research in this area and looked at what I had on hand from a earler test layout I had built, I decided that the majority of hidden switch mashines would be old H&M coil snap machines and be driven by Digitrax DS54's (as I some of these on hand). The H&M machines are a old machine that I had access to and make a decent "wack" sound when they thrown. Once these were combined with the approriate tension piano wire they are able to throw the Atlas turn out and keep them locked in place.

As part of my earlier test layout I found that the normal standard DS54 did not cope very well with the H&M coil machine power requirements. I then did a search and found a circuit on the internet that could be used in conjunction with the DS54 and effectively be a capacitor discharge unit on each output of the DS54 to drive the turnouts I have.. http://jean-louis.simonet.perso.neuf.fr/Ds54_CDU.pdf (all credit to Jean-Louis Simonet for the design and his assistance)

The info on the net from Jean-Louis provided circuit board etchings etc so I set to work. I then found a local circuit board etching company and had them etched.. Unfortunately they were not scaled quite correctly so they came out 1/3 plysically larger than what they needed to be but I was still able to install all the componenets and get it working.. (sorry for the quality of the picture).. 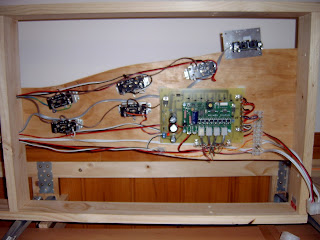 The benifit of the H&M's as mentioned means that you can hear the turnouts throwing in the staging with out seeing them.. (more on the management of routes and displays later..)

Next time...
In the next blog we will continue with track laying..

Email ThisBlogThis!Share to TwitterShare to FacebookShare to Pinterest
Labels: Tracklaying