More Track Laying..
Now the staging was tested and I was happy with the results I then proceeded with more track laying and also layering of the next parts of the layout that would then form the main line..

As mentioned, I decided to use 3mm cork for my sub road bed on the 5ply timber.
By this time I had cut a large number of 15mm strips of cork for the sub road bed..
In order to get the track level looking right per the normal right of way, I marked where the track was to be placed, then used 2 pieces of 15mm cork side by side using the track middle line as the guide. I then glued this down with white glue and pins.. Then I used a second 3mm x 15mm strip of cork as the next layer to build up the sub road bed to give it that realistic high look ready for balasting in the future..

I also used the same method for the passing loops or sidings but I wanted to reduce the hight ever so slightly to give it a lower look.. I used the same 2 pieces of 3mm cork side by side and then used 1 strip of 1.5mm x 15mm cork to form the second or non main line track sub road bed. The end result is kind of neat..

Here are a few progress shots... 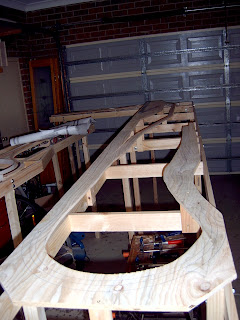 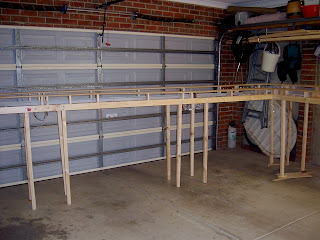 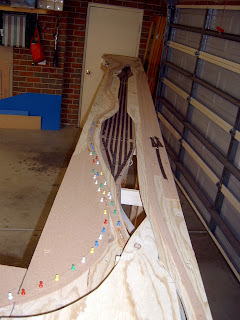 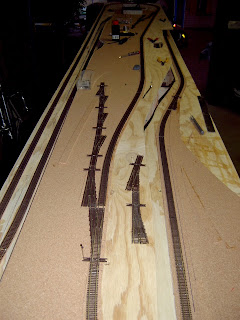 By this time I am really enjoying this track laying gig..!

More Electricals..
In terms of power supply for the Digitrax DCS100 I use a old IBM Laptop docking station power supply that gives out 16V at 7.5A. Even though I only have a DCS100 I figured this would be more than ample and a nice smooth DC input for the input of the DCS100.. The power supply also has its own overload protection built in..
For the DS54, BDL168, UP5, UR92's and TC64's on the layout I use another IBM laptop power supply this time running at 16V DC and driving out 4.5A.. Again nice and smooth and has its own overload protection.. Use this power supply to drive all my acessories such as the Digitrax units and others as mentioned above. I dont have any issue with driving all of these from the same unit..
In terms of short protection on the layout I use DCC Specialties / Tony's Trains OG-CB's for the 3 power sub districts and I use the similar OG-AR's (solid state auto reversing management devices) for the 2 reversing loops I ahve on the layout.
Here are the OG-CB and OG-AR's along with the DCS100 power supply.. 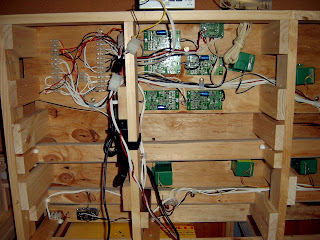 For the reverse loop on the end of the hidden staging I use DCC Specialties / Tonys Trains PSX-ARSC.. This great device is short protection, Auto reversing and also Solid State turnout driver board plus occupancy detection output..
I wired it to the reverse loop on the staging yard.. I placed 4 insulated joiners directly on the end of the #7 Atlas code 55 turnout and the H&M coil machine on the output of the snap coil machine section of the PSX-ARSC..
This great board then enabled me to wire in the reverse loop and the coil machine to the board.. I can then run a train into the reverse loop and just keep driving. The PSX-ARSC will detect when the train gets to the other end of the loop and crosses the gap on the turnout just next to the frog detects that the track section needs to be reversed, does the auto reverse and also throws the snap coil machine.. All within a milisecond..
So the end result is that the loco runs the gap, the reverser does the auto reverse and then thows the switch points all before the loco gets to the frog that is less than 5mm away. I can then just blindly set the staging for the empty track where the train is destined to go, run the traing all the way through staging, it goes around the loop the PSX-ARSC does its job, throws the turnout and the train then proceeds back into the same staging track it just left.. The engineer then waits for the train to come into view at the end of the staging track or sees a block dection indication light comes on and stops the train.. All with out needing to change a turn out. Just great..!

Next time..
First cut at CTC Panel and Block detection and Signal drivers..

Email ThisBlogThis!Share to TwitterShare to FacebookShare to Pinterest
Labels: Tracklaying