Welcome back.
In todays update I will go over the reasons for choosing the D&H as a prototype to model.

First I need to go back some 25 years. As a child and a teen I was always into model railways and picked up the hobby from my father. I can always remeber we had trains in the house and or in dad's shed. Now back in those days my father modeled US prototype HO and most of his equipment was brass. I grew up running those nice brass loco's and when it was time to have my own, I decided that I liked N scale rather than HO so made the switch.

In the following years I collected anything that "looked nice" and had a number of the older Bachmann loco's along with Rivarossi E8's etc. After a while I found that the Japaneese models ran so much better than the US models so sold up all my US models and went Japaneese for a period. Then I decided I actually liked the US stuff better. So sold up again and moved back to the US based models.

Again, I was back to just buying what looked nice and ran well. Soon my collection was getting out of hand and I decided I had to concentrate on a road name. So I did some recearch and as I already had some D&H U30c's from Kato, and I wanted to keep a lid on spending, I found that the D&H only had a total of 16 different types of loco's. This sounded perfect, plus the scenery of up state New York (from books, pictures, Video's) looked to have enough different type that it would be a nice place to model.. So I settled for the D&H based on the fabulous D&H Grey and Blue lightning strike paint scheme.

As the D&H also was mainly a Alco and GE road I favoured these types of loco's over the EMD's. 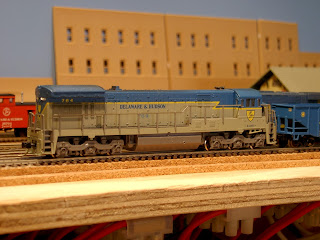 This U33C has been made from a Kato U30C and a wide radiator grid added from a older Bachman U33B.

As most know the D&H went thought a phase where 4 ex SantaFe PA1's were purchased along with 2 Baldwin RF16 sharks.

Then by the time the mid 70's came along and the failure of a number of Eastern roads and the creation of Conrail. At this time the D&H obtained a number of ex Lehigh Valley C420's, GP38-2's and GP39-2's and then later a number of C424m's. 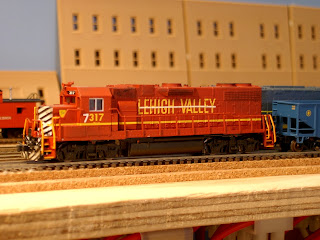 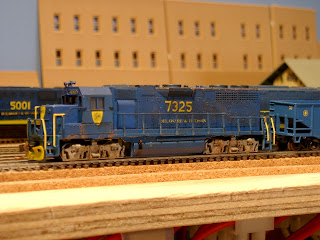 With the purchase of the LV and Reading loco's in the mid 70's a number of colour scheme variations came about and added to the colour of the D&H and I have attempted to capture this with some of my loco's and rolling stock. 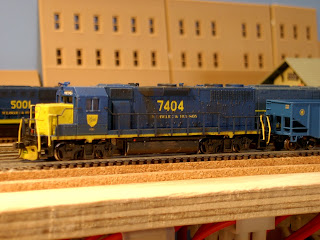 This GP39-2 I made from a early series GP38 as made by Atlas and changed the exhaust configuration on the roof of the loco so that it represents a GP39-2. The number of engine room doors may not be correct byt close enough for now.

In terms of my fleet, the only models I dont have examples of are an S4, RS11/RS36 low nose.
I am eagerly waiting for Altas or another manufacturer to make these.

All my loco's have been converted to DCC using DZ123's or DZ125's. One of my U30C's has a locsound sound decoder installed and it sounds great!.