Cork and wiring rough in

Its all in the planing.!

Sometimes, the success of a railroad is all in the planing..

This week, I procured 35 sheets of 3mm cork and 10 sheets of 1.5mm cork that is to be used between the track and the ply base of the layout.

I then set off to my fathers factory where a 20 ton guillotine is available for the rapid slicing of the cork. Unfortunately the blade is not as sharp as it could be and the cut was not as clean as I needed. So, I left a number of sheets at the factory, as the blade is to be replaced in the next week or so to then be cut.

In the mean time, I have been planing the multiple main bus wiring for the track power, the auxiliary device power, Loconet and also the phone system.

This week, I have managed to install the main bus wires for all of the above. I soon found that I needed 40 meters of Loconet cable and similar amounts of wire for the phone, track power and aux power bus. 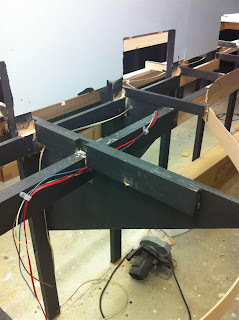 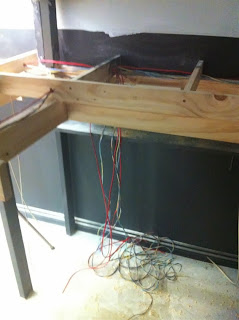 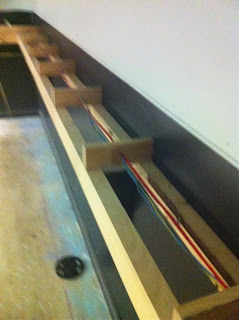 Sorry for the poor pictures.. But you get the idea!

I have also looked at the requirements to drive all my signals, turnouts and block detection.
I have now planned where all those devices need to be installed around the layout. All 28 devices excluding the DCS100!.. See the plan for what I mean.. 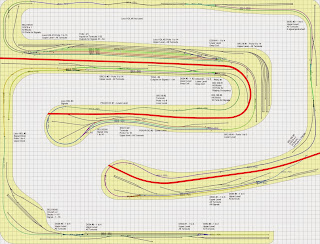 In the plan all turnouts are managed via a loconet device, all main line and loop blocks are detected including separate OS sections for each of the turnout interlockings.
There will be 9 power districts (only so that when a short is encountered in a town, the rest of the layout is not effected.) All this will be run from 1 x DCS100.

I will now set about installing the loconet aux devices on timber and pre wiring them with terminal blocks before I install the decks of the layout. Once ready I will install them before screwing down the decks that I have already cut. (to make the install easier!).

Stay tuned for the next update.
Posted by Brendan at 22:24