As the new layout is going to need almost double the number of turnouts that the old layout had, I decided that the most economical way to get the railroad built is to build my own turnouts. Kind of like "roll your own". Also there is a distinct shortage of Atlas Code 55 turnouts at present.

So I did some research and the bet method seems to be using the fastracks jigs and tools.

Luckily a friend had a relative unused jig hat I could procure. So once the procurement was completed, and time was available I set about building my first turn out.

The fastracks jig is made for Micro Engineering code 55 rail. However, I have plenty of short pieces from the old layout that I collected and plan to use all Atlas Code 55 rail for my turnouts. The Atlas code 55 rail has a slightly narrower rail head so the hand made ones should blend in well with the rest of the Atlas Code 55 rail on the layout.

All in all it took probably an hour and thirty minutes to build (including watching the how to videos from Fastracks) up to and not including adding the wooden ties to the turnout.

While it is not perfect and I need to make some adjustments, all in all I'm happy with the way it has come out.

You may also notice that the throw bar is wider than the standard Fastracks throw bar. I changed to the wider throw bar based on recommendations from others. This has a few advantages in that the solder joint to the point rails should be much stronger. Also the wider throw bar should better accommodate the hole needed for the tortoise switch machine under the layout. The standard PC board ties are very narrow and are prone to snapping  in half when a hole is drilled for the tortoise throw rod.

Here is a picture of the turnout and the jig. 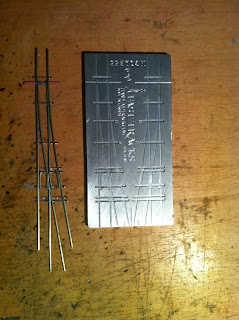 Here is a picture of my turnout next to a stock standard Atlas turnout. 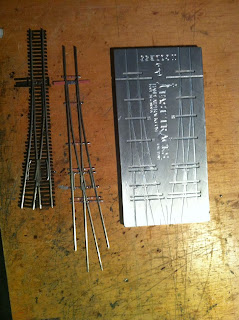 I added some Atlas Code 55 ties to the 2 ends to keep things true. 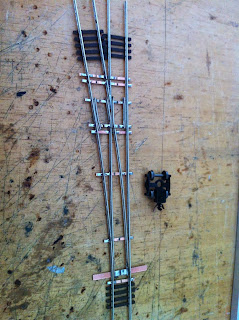 So there you have it. 1 turnout, this one is definately a test and wont go on the layout as it has a few flaws, now for the 48 that I need for the layout.

A further update. I have now built my second turnout and based on my learnings from the first this one is better and has much sharper frog points and much better point rails. 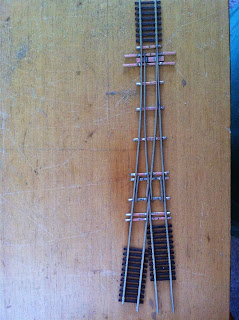 Thanks for checking in on the progress..
Posted by Brendan at 22:41