With the construction about to begin, I have been doing a heap of work on the design.

I have tried a number of ideas with the staging and have come up with the following design. 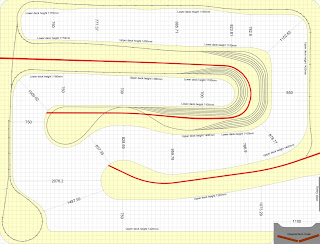 The plan is that trains will set up ready to leave staging heading either North or South.
As a given train progresses out of staging and onto the layout, it will eventually end up in staging again on the opposite end of the layout.
Once the train has re entered staging it will stay there until it is turned and prepared to depart again with a new train number. (The turning of a train via the reversing loop will primarily be done by me and not the engineers).

As you can see from the plan there is a staging bypass track. This will mainly only be used during non operating sessions where I want to set a train going and leave it run around the layout.

Main Deck:
I have not changed the main deck much since the last update as I am happy with it. I have made a few tweaks here and there and adjusted some deck heights to allow more space between levels. 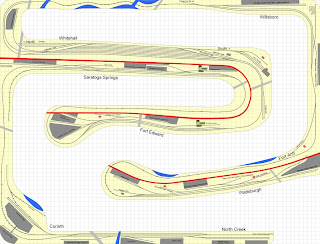 Testing the layout:
I recently came across some software called Train Player.
This allows me to import the plan as it stands from Anyrail V5 into Train player.
I can then set up a train with the car types I want to use and a few loco's and basically operate the layout as it will work in the shed. This software is great.! I could set up a 2 loco, 20 x 50ft box cars and a caboose and run it around the entire layout including in and out of staging.
I am able to see if my standard train length is able to fit into the sidings and also run the train at a given scale speed and see how long it takes to run the entire layout.

During my testing, I ran a 20 car train at 72km/h (scale speed) around the layout from staging to staging. It took about 10 real minutes to run the entire length. This is a great way to test and see how things will work.

Anyway, the timber is due to arrive in the next week or so and then it will be time to get stuck into the construction.
Come back from time to time and watch how we progress..

I am going to set an ambitious target of the staging and main line it self to be completed by Christmas. So lets see how we go.