Planning for D&H Version 3
Now that the convention is complete and the layout is back in the shed and operational, I can now start planing the next version of the D&H to fill my 7.5m x 6m shed.

As mentioned in earlier posts, I plan on reusing as much as I can from the old layout in the new version.

During the convention I had the pleasure of helping to run Rod's and Bruce's layout. The one thing that struck me was the use of a duck under to enter the room. I had been planning on using one but after reading a few things in forums recently and operating the two layouts, I decided that a walk in layout needed to be on my given's list and not just a druther.

After a heap of thinking and some help from Duncan, we have come up with a foot print that I really like and will become the new layout. This new foot print doe not have a duck under and is a walk in layout. It is very similar to Ron's layout with a change in terms of one of the peninsula's. 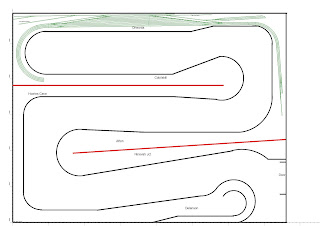 I have also done a heap of work and thinking about the isle spaces to enable people to pass and operate the layout with plenty of elbow room. 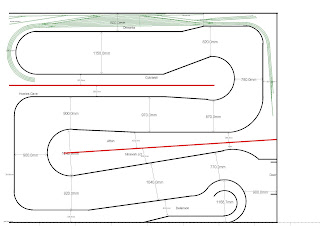 In the second picture the dimensions are included.

Per this plan the main yard is starting to take shape but not yet finalised.

The plan is for the main layout to all be seen with trains entering hidden staging via the loop at the bottom and also along the edge near the door. The staging or hidden track will then continue around the wall under the layout and descend up to 400mm to the 7 or 14 track staging yard below the layout along the left wall. Then the staging will continue towards the main layout via the peninsula that is against the lower wall.

As trains on the new layout will be 2 loco's, 20 x 50ft cars and a caboose, towns and yards need to be longer than what they are on the current layout. So its now all about planing..

Stay tuned and we plot out the track plan for the new layout..