Well, As you may have guessed from the last blog update. The railway room is now ready and its time for the D&H layout to come home.

Very soon after finishing painting the room I arranged to loan a tandem trailer from my good friend Vic.
The trailer had previously been used to tansport Rod and Vic's Thompson River Canyon Layout to exhibitions a few years ago. Now the Thompson River is firmly installed in Barrie's railway room, the poor old trailer was sitting now redundant.

After a number of emails to Vic and John C, it soom became apparent that the D&H would fit in the trailer and the move was on. So on the 7th I trecked out to Ringwood to pick up the trailer and then over to Oakligh where the layout has been in storage for more than 18 months at my fathers factory.

To say that the layout fit perfectly would be an understatement. There was about 10mm to spare on one side. The lenght of the trailer was perfect and the layout slid right in. It fit so snugly that I did not need to tie it down. 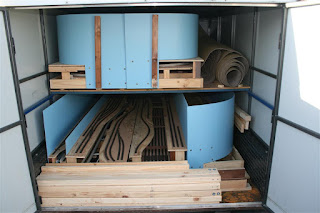 I then set off and headed for Wantirna for a operating session at Rod's as we were conducting the first test of his signaling project on the SFRSD. With the D&H in tow via Wantrina and the session now complete at Rod's I headed home to Sunbury.

At the crack of dawn, (well 8am ish after a bit of a sleep in) I backed the trailer up to the shed and proceeded to unload the D&H. 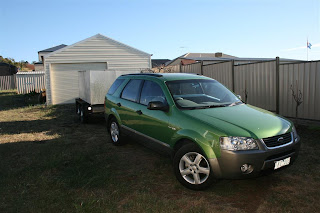 Before long she was up on her lanky legs and in position. 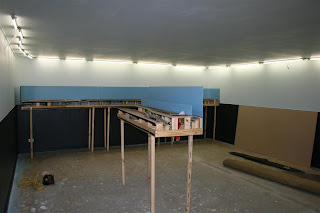 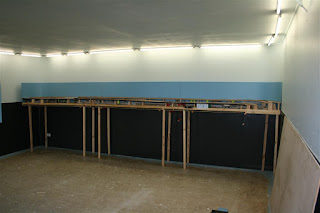 Afer a hour or so of re adding the small sections of rail between modules and giving the track a damn good clean, it was time to run trains. 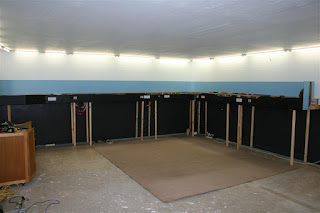 U30C #709 and 2 other sister engines had the honour of runnig the first 20 car train around the layout. 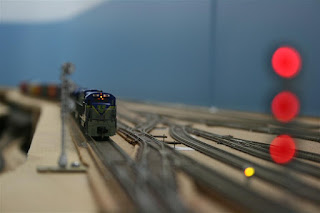 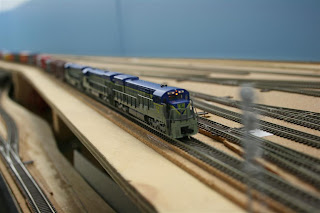 With only 1 minor loose wire on a turnout the layout and the Panel Pro Panel worked perfectly as if it had never been in storage.!

Thanks to all the help I have received over the last 18 months in building the shed and painting it. It certainly has been appreciated.

Now the D&H is back up and running, and looking very small in the large room. Now it is time to plan for bigger and better things.

In the mean time, I will complete the signals for the layout so that the layout can take a brief trip to the Melbourne N scale convention in March 2013.

Stay tuned for updates on the build of the signals.